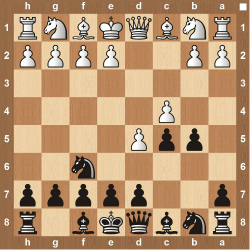 White can either accept the gambit or decline this gambit with Nf3. Although some players may prefer to decline the gambit if they are unfamiliar you will almost always see white accept with cxb5.

Black’s entire goal is to give up a pawn early on to give himself a big advantage on the queen side. Black will continue to try to give white another pawn with a6. Many players don’t mind playing down a pawn as black because of the great attacking lines that stem from the queen side attack in the Benko Gambit.

If you play as white in the Benko Gambit and you don’t want to get into the main line, defending your queen side all game, it is common practice to give back the pawn material advantage and focus on building up your central control.

This opening is not for the faint of heart. It’s a very aggressive opening and should be played accordingly.

Watch the video below to get a detailed explanation of the Benko Gambit.