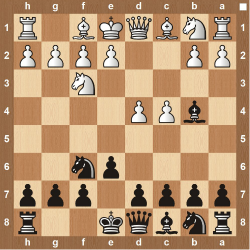 The Bogo Indian Defense is a chess opening that arrives after the starting moves:

Many players with the white pieces will choose the third move Nf3 instead of Nc3 because they want to avoid the Nimzo Indian Defense. Black has multiple options after Nf3 but Bb4+ is a common move seen at all levels of play.

Nc3 tends to go down a Nimzo-Indian Defense line. Bd2 is the main line that white can go down and the one I recommend. It forces black to retreat the bishop on b4 or potentially lose the piece. Black can defend it with the pawn on a5 or Qe7. Both allow white to control more of the center of the board. The other option is Nbd2 which supports a push to e4 but also blocks off the B on c1.