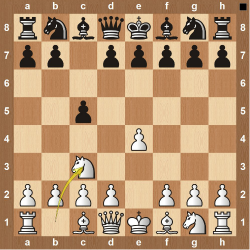 The Closed Sicilian is one of the more common lines that white has in the Sicilian Defense and begins with the moves:

Most of the theory in the Sicilian Defense revolves around white playing Nf3 on the second move but playing 2. Nc3 is a very strong move that often gets overlooked. There are a few variations that you will typically see from black after you play the Closed Sicilian.

This is the main line. White should now play 3. g3, prepare to fianchetto your bishop to the g2 square. If they decide to play g6 and mirror what you are doing then look to play Bg2, Nf3, and castle on the kings side.

If they want to push in the center of the board with e5 or d6 then you can solidify the pawn structure with d3. The only difference would be if you see d5. This is forcing an answer from white because it’s attacking the white pawn on e4. You can take with Nxd5 and be ok after the exchange of knights and pawns.

White can still continue with 3. g3. The only difference would be that if they now continue with g6 to mirror us white can play Nf3. White may do this because they may decide they want to bring their bishop to c4 instead of coming to g2. Once black has played e5 this makes the light square diagonally much easier to attach with the light square bishop.

Play might continue with 2…e5 3. g3 g6 4. Nf3 Nc6 5. Bc4 Bg7 6. Nb5. White is now threatening Nd6 and eyeing down the weakness on f7 with the light square bishop. After white plays d3 then the bishop on c1 is protecting Ng5 adding another attacker on the f7 square. There are lots of options for white in this board state.

Expect the same story as some of the other variations. White can play g3 and see how black responds. They generally will fall into one of the main lines like 4…Nc6 and we have the same variation as above.

If they don’t play a common line and instead try something like Nf6 then white can take advantage. This is a big mistake for black. White can play 4. e5, force the knight to go back to g8 and white would be up two moves and would have complete control of the center of the board. It should be a pretty easy game for white.

With e4 such a common move for many players using the white pieces it’s important to have a variety of weapons if your opponent plays the Sicilian Defense. The Closed Sicilian gives white a great game while taking away many of the tricky lines that black likes to play in the Sicilian Defense with 2. Nf3.

Below you can watch all of the lines referenced on this page and see a much deeper analysis on the Closed Sicilian.