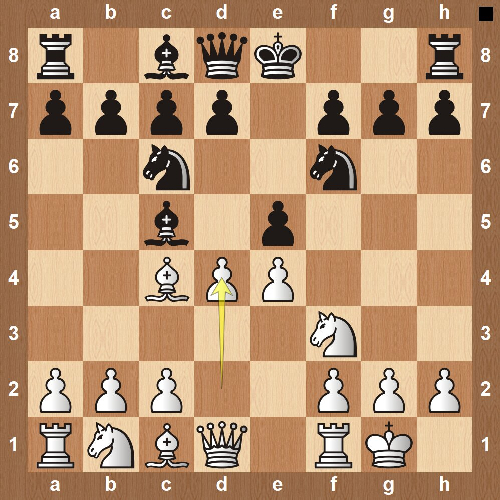 The Deutz Gambit is an aggressive line by white in the Italian Game and Giuoco Piano. It starts with the moves:

White has a safe king and wants to strike the center of the board with d4 and start attacking the black king sooner than later. Black is almost forced to take the pawn on d4 with the bishop, knight, or pawn.

If black decides to take the pawn with the knight on d4, white will respond with 6. Nxe5. Notice the pressure white is putting on the f7 square. This is the weakest square for black early in the game because the king is the only piece protecting it. Now white has both the knight and bishop in striking distance of the weakened square.

Black might try to play it safe and castle, but that loses to 7. Be3. White has the bishop and queen attacking the knight and black will end up losing a minor piece. If instead black tries 6…Qe7, white can punish black with 7. Bxf7. The f7 square is still under attack from the knight and black is forced to move the king and damage their setup.

This is the strongest variation for black. After the exchange 6. Nxd4 Nxd4, white can play 7. f4. This threatens the sole pawn that is holding the center of the board together for black. Black should try to hold onto this pawn with 7…d6, but will find themselves well behind if they go with any other option.

After the pawn takes on d4, white will push the center pawn with 6. e5. This is the Max Lange Attack and is one of the hardest for black to defend against.

Black can also try to block the center of the board with 6…d5, but white is better of with the exchanges after 7. exf6 dxc4 8. fxg7.

Below you can watch all of the lines referenced on this page and see a much deeper analysis on the Deutz Gambit.