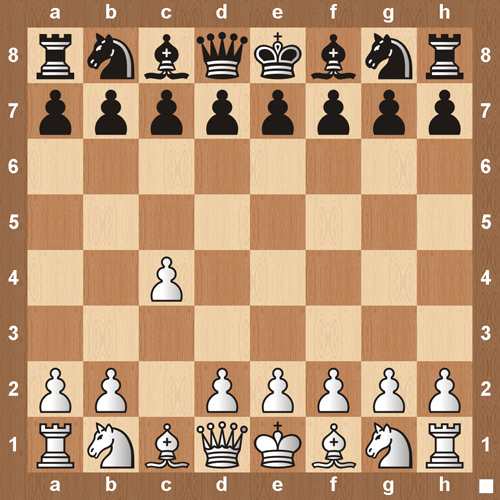 The English opening is the 4th most common opening for white. Although the English has its own style, the opening is very flexible and many times transposes into other opening lines. The objective of the opening is to apply pressure on the center d5 square without committing the queen pawn or the king pawn. Since the move is a flank move many players like the English because of its hypermodern style of play (using pieces from the sides along with minor pieces to apply pressure and control the center).

White’s 2nd move depends on black’s response. If black does not immediately try to control the center white can fianchetto his bishop with 2. g3 3. Bg2 and white starts to apply even more pressure on the d5 square and gives white the control over the light squares. Many English games will start out very slow as both sides build up pressure around the center.

The good thing about the English is that you can be very versatile. With all the different openings that you can transpose into, the English can be used against any opponent as you can change your game plan early on. If you like slow methodical games and like to be flexible this is a great opening to use.

The bad thing about the English is there are many traps that exist to defend the English. As with any opening you should be aware of the traps that you might encounter.