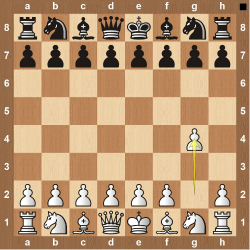 The Grob Attack is not a common opening and many people think of it as one of white’s weakest opening choices because it doesn’t attack the center of the board and it weakens the king’s safety. It begins with the move:

While this isn’t the strongest move from white there are still some interest lines that white can go down to put black in a tough spot. Black will normally respond to the Grob Attack with one of the following:

It doesn’t matter where black moves. White should be looking to get the bishop to g2 and control the light square diagonal. If black started with d5 then white will usually play the third move of 3. c4. This looks to undermine the center control of the light squares and if black did take the pawn on g4, then white has a clear shot on the b7 square.

One of the benefits of playing an opening like the Grob Attack is that it’s seldom used and so most people don’t have experience playing against it. While a strong player, with enough time, might find the best lines it still will be difficult with all of the attacking lines that white has. If it’s a blitz or bullet chess game then an opponent that hasn’t encountered the Grob can easily fall into one of the many traps the opening has to offer.

As with many openings it all comes down to preparation. Know the Grob more than your opponent and you will probably fair better than you might think.