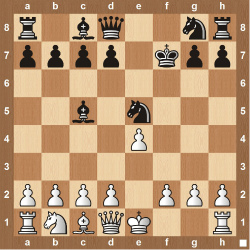 The Jerome Gambit is an extremely aggressive opening that usually derives from the Giuoco Piano. White sacrifices both his king side bishop and knight in exchange for an exposed king and the possibility of an aggressive attack. Moves usually start with:

White usually continues with Qh5+. This gets the most important piece into the attack early and leaves black with the most possibilities to blunder. If black moves Ke7 or f6 then white is going to have a fairly easy game. The best move for black is Ke6 but it’s difficult to bring the king into the center of the board unless you are prepared for this opening.

While some gambits are completely sound and can be played as all levels of competition, the Jerome Gambit should be utilized more for fun or for blitz games. If black plays correctly then white will be too far down in material and lose.

For those players that like super aggressive openings where you chase your opponent’s king all over the board this is definitely an opening you’ll like.

Make sure you check out the video below to learn more about all the variations.