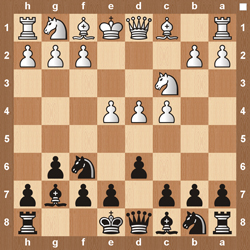 The Kings Indian Defense is one of the most solid defenses in chess. Black builds an extremely strong defense around his king and then looks to counter attack depending on where white’s structure is weak.

Play normally starts in the Kings Indian Defense with the moves:

This defense is a hypermodern idea that allows white to control the center of the board early on while black looks to develop his minor pieces early on and move his pawns towards the center later on in the game.

Although the Kings Indian Defense is a very solid opening for black it is also very passive in the early stages and if you are a very aggressive player you will not enjoy this opening. Much like any opening in chess, though, in the middle stages of this opening will allow for many opportunities for counter play.

Watch the video below to get a detailed explanation of the defense and extended lines.