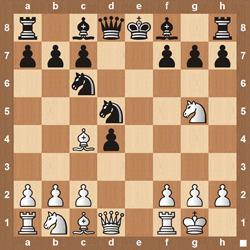 The Lolli Attack is an aggressive opening for white in the Italian game when black defends with the two knights defense. Instead of immediately sacrificing the knight on f7, white instead plays d4, sacrificing another pawn and then castling kingside.

This is very similar to the Fried Liver Attack, but castling on the kingside gives white another powerful piece, the rook, involved into the attack. Regardless of how black defends, white will look to sacrifice his knight on f7 and the start the assault against the black king.

Even though black is up in material, white has a big advantage and scores extremely high in the win category in chess competitions. This is very difficult to play as black as the king is chased all over the board and it’s tough to find much counterplay.

If you play the Italian game and like aggressive lines, I highly recommend the Lolli Attack.