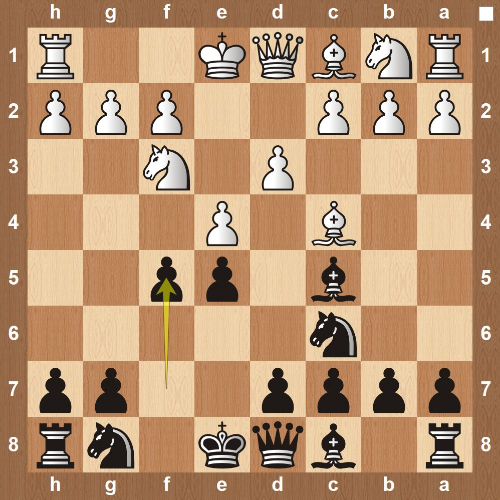 The Lucchini Gambit is an aggressive line by black in the Italian Game and Giuoco Piano. It starts with the moves:

The most common 4th move from white is 4. c3 but the next three alternatives 4. b4, 4. d3, 4. O-O are all very common variations for white. If white plays d3, black can strike with the Lucchini Gambit by playing 4…f5.

The most common play for white is to play 6. Nf7. This forks the black queen and rook. Black can play 6…Qh4 and threaten a massive attack. The most immediate threat is Qxf2# so white can’t take rook on h8. There are two ways for white to defend here. 7. O-O and 7. g3.

Black plays Nf6 and sets another trap. White may feel like they can take the rook on h8 now that f2 is secure, but it’s a trap. After 8. Nxh8 Ng4 and the threats become difficult for white to deal with. White looks to avoid mate on h2 by playing 9. h3. Black has the queen, knight, and bishop all lined up on the f2 pawn and can strike now.

If white tries 8. d4 instead of Nxh8, black can still play Ng4 with the same threats after Bxd4.

Black pushes the queen forward 7…Qh3. The rook on h8 continues to be a trap. If white takes 8. Nxh8 then black plays d5 and prepares for Bg4. This attacks the white queen and adds additional pieces to the attack for black.

This isn’t as common as 5. Ng5 but your opponents may decide that trading off material is a solid plan when they don’t understand the opening. 5…Rxg8 and black is fine. If white now continues Ng5 black can play g6. This stops the white queen from coming to h5 and baits the knight to take the poisoned pawn on h7. Black can then play Qh4, threatening f2 mate and will capture the knight.

If white castles, then black will shift gears on tactics. Black continues with 5…Nf6 to attack the center. If white now goes for Ng5, then black defends with Qe7.

There aren’t many openings that are filled with as many traps as the Lucchini Gambit. White is always in tough positions and it’s difficult to find the right moves against the attack from black.

Below you can watch all of the lines referenced on this page and see a much deeper analysis on the Lucchini Gambit.