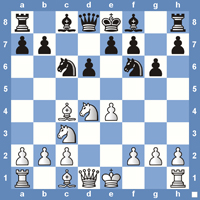 The Magnus Smith Trap derives from the Sicilian Defense, in particular the Fischer Variation which puts white’s light square bishop on c4, attacking the f7 square.

Black has two options. His best move is to stop the attack from white with e6. It’s a passive move but most Sicilian defenses slowly build up a solid defense and attack later, leaving themselves with a strong pawn structure in the end game. If black chooses to play g6 (which is very common), then he has fallen into the trap. White has the move e5 which puts black in a tough spot. He can’t recapture with his pawn or else he will lose his queen. If he instead moves his knight, white can continue to apply pressure and force black into a corner with all his pieces passive and looking for a way out. If you play against the Sicilian very often you might want to try out the Fischer variation just in case you come across an opponent that thinks g6 is a viable option. If you ever play the Sicilian make sure that you instead play e6.

Watch the video to the left to watch more detailed explanations of the Magnus Smith Trap.