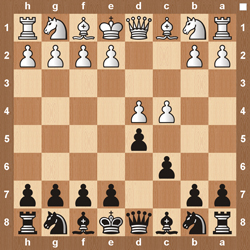 The Slav also allows for lots of different variations so those players that like to be creative and don’t like to play the same variation every game will really enjoy the Slav Defense because it offers just that.

In the second move black looks to defend his pawn on d5 with his c6 pawn. This is done so that his pawn on the e file can stay as needed and not block the way of the light square bishop.

In the main line of the Slav Defense white looks to dominate the center of the board and black looks to develop both bishops and maintain a solid pawn structure. This is a very sound defense for black and one that is hard to crack for white. Black has many counter attacking lines that white has to be aware of once the game reaches the middle game.

Watch the video below to watch an explanation of the Slav Defense.