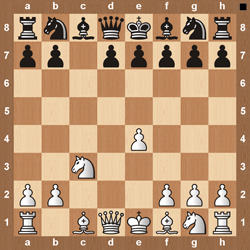 This gambit is only for very aggressive players as are most gambits. White looks to not only take black out of the normal Sicilian lines but also looks to use the advantage in development to overwhelm the black king.

White usually looks to put his bishop on c4 (attacking the weak pawn on f7). Then looks to castle king side after his knight comes to f3. Then eventually his rooks would like to come to the open c file and the semi open d file. After this white will have a lot of attacking lines at his disposal.

Black has to play rather carefully during this game and many Sicilian defenders had to play against the Smith Morra Gambit.

Watch the video below to watch an explanation of the Smith Morra Gambit.