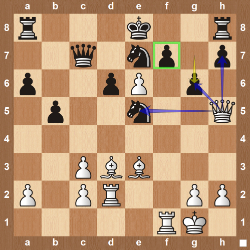 Everyone loves a great queen sacrifice. At the highest level, when you see a queen sacrifice, it’s usually because something crazy is about to happen. It might be that there is a checkmate coming soon and there is no way for the opponent to stop it. It also could be that one side decides that after an exchange, by giving up their queen, they are better off.

Regardless of the reason, it’s always fun to see the best in the world giving up their most powerful piece.

Here is a list of the top 6 chess sacrifices:

To watch an overview of these Queen Sacrifices in action you can check out the video below.