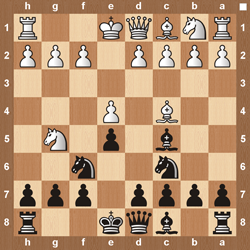 The Traxler counter attack derives from the two knights defense from black after white develops into the Italian game.

After white moves his knight to g5, attacking the weakened f7 square, black counter attacks with Bc5, disregarding his own safety for a lethal attack on white’s king side.

If white captures the pawn on f7 with his knight, forking the queen and the rook, black can start the counter attack with Bxf2.

It is extremely difficult for white to avoid having his king chased around the entire board and although black is down in material early, black can easily bring his pieces into action very quickly while white usually has a hard time moving any of his queen side pieces.