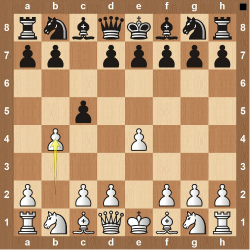 The Wing Gambit can be found in multiple opening lines. This page is specifically looking at the Wing Gambit in the Sicilian Defense. It starts with the moves:

White looks to give up the b pawn in exchange for the removal of black’s dangerous c pawn in the Sicilian Defense. Usually black will take the pawn on b4 and white will continue with a3.

While many gambits give a side a strong attack, an extra tempo, or a better position, the Wing Gambit is difficult to play as White and have a strong game. One of the things to look at in a Gambit is how many opportunities does your opponent have to make a mistake where you can easily win. In the Wing Gambit there are not many options for black to make a huge mistake.

After white plays a3 the best move from black is to play d5. This move attacks the core of white’s attack in the center of the board and also maintains control of the c3 square with it’s pawn on b4. This stops the white Knight from getting into the game and allows black to develop the board to a very favorable state.