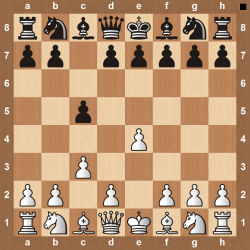 The Alapin Variation is considered to be the anti-Sicilian. It is played by many of the top chess players including a number of world champions. The Sicilian defense gives black a lot of initiative, which is why it is seen at all level of chess. The Alapin looks to take all of that initiative and put white back in the drivers seat.

White’s second move, c3, prepares the way for white to counter the d4 square that black currently controls with his c5 pawn.

This opening is one of the easier ones to remember because the themes are so consistent between all the variations. Your goal as white is to control the d4 square and control the center of the board.

There aren’t any crazy traps or sharp lines that you can throw at your opponent but most Sicilian players aren’t expecting to see c3 and tend to play poorly because of the lack of preparation.