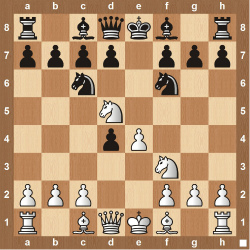 The Belgrade Gambit is an aggressive line that derives from the Scotch Four Knights Game:

White’s most common move after 4…exd4 is to recapture with 5. Nxd4 but Nd5 allows white to transition into the Belgrade Gambit. As with many less known gambits, the Belgrade gets much of its advantage from your opponent not being familiar with how to play correctly as black. The good thing about this variation is that if you play 1. e4 2. Nf3 you’ll get many opportunities to try this out as it’s fairly easy to transition into a four knights game.

Make sure you check out the video below to learn more about all the variations. We cover all the key concepts in the opening so you can be the most prepared person if you ever play with or against the Belgrade Gambit.