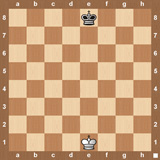 Kings really don’t have a value in chess because they are priceless. If the king goes down you lose the game. So while they might not be the most powerful piece in regards to movement and attacking prowess, their safety should go above any and everything in a chess game.

The king does get to move though and many times can be a great piece in a chess attack. The king can move one space in any direction. It is usually smart to keep your king safe early in a game, when both sides have all their pieces moving around the board and lots of attacks are lurking. Once pieces start to leave the board and the king can no longer be immediately threatened then you will want to get the king involved. Towards the end of a game you always want to make sure your king is brought towards the center of the board and he helps out in the attack.

Watch the video below to learn more about kings.