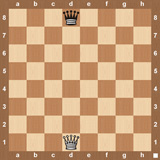 Queens are the most powerful piece in chess. They are worth 9 points and can move diagonally or horizontally as far as they can travel without hopping over pieces. A queen moves the same as a bishop and a rook combined which makes your most important piece.

One of the biggest mistakes beginners make with their queens is bringing them into the game too early. They assume that because they are the most powerful, they should get them involved in the battle early on. This sounds good, but in theory it doesn’t work out. Players that bring out their queens out early usually end up losing lots of time in development. Your opponent can focus his time developing his pieces towards the center while you are worrying about your queen safety.

In the beginning of a game, the queen by itself hardly ever does much damage. Mixed with the bishops, knights and rooks however, the queen does lots of damage. When you develop your queen early on, make sure that it is supporting as many pieces as possible. That way when any of your pieces start an attack your queen will be there supporting the attack, but won’t be in danger.

Watch the video below to watch a detailed video of queens.