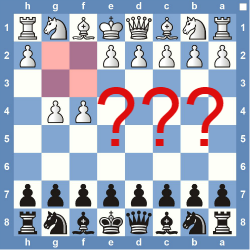 One of the first things someone does after they learn how to play chess is figure out the fastest possible checkmate. When you ask most people the fewest number of moves it takes to checkmate your opponent, the answer is normally four or more. Only someone that is well versed in the game knows the true answer.

Two moves is the fastest checkmate.

This opening is called the Fool’s Mate because it’s a serious blunder for one side to lose in only two moves.

For some, that is hard to understand. There is hardly enough development of pieces to checkmate an opponent in two moves. It all comes down to the weakness of the kingside for white. If the pawns move, there is no material to protect the king and it only takes a single piece to deliver the final blow. The move order for a two move checkmate is:

Criteria to pull of a checkmate in two moves:

1. White has to go first.
2. Black must move the e-pawn on the first move to allow the queen to come to h4.
3. White must move the f and g-pawn so that neither can block the queen on h4.

It is a rare occurrence, but know you know how to checkmate your opponent in only two moves.

Below you can watch a video that explains more on the fastest checkmate in chess.