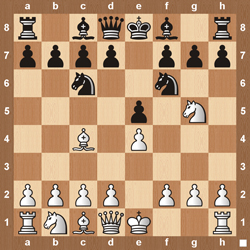 The Fried Liver Attack is one of the most aggressive openings from white as you will be sacrificing one of your minor pieces very early in the game.

White is looking to sacrificing his bishop on f7 in exchange for a very strong assault against the black king. The black king will be forced to the middle and will be under attack the entire game. It is extremely difficult to defend this properly and you don’t want to play black in this situation.