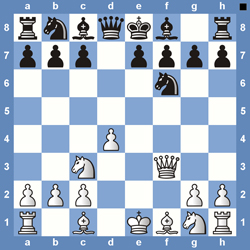 After white responds with Be3, attacking the queen, black is forced to choose where to move his queen to safety. Many players will choose b4 as it looks like a safe square and it also looks like it can easily attack the b2 square. Black is not worried about white castling because his bishop can come to g4 and then pin the queen down to the rook.

This is exactly what white wants black to think and white can continue with this plan to castle, leaving his queen to be pinned and instead play Nb5 setting up many great attacking lines for white. Black is all but lost and will lose considerable material.

Watch the video below to see a detailed explanation of this trap.