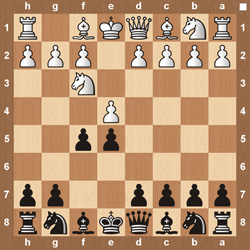 The Latvian Gambit is a very aggressive opening defense for black against one of the more common openings for white. This opening is not seen much at master level chess as most masters refuse to give up material early on in a game. Below master level play there are strong advocates of the Latvian Gambit and I personally enjoy the possibilities that arise from this opening.

What makes this is such an interesting opening is that white does not have many good moves besides accepting the gambit. If white refuses the gambit, black will have the same aggressive style of play with this f file open, potential for a castle rook, but also black will not be down in material. This is why it is far more common for white to accept the gambit with Nxe5. From here black has many options, all of which are very aggressive. Many Latvian Gambit games are filled with crazy and wild sacrifices. I would not recommend playing this opening if you are only looking to go down 1 pawn in material and claw back the rest of the game. The Latvian Gambit usually is an all out war, doing whatever it takes to checkmate your opponent, even if that means giving up a few pieces.

Watch the video below to get a detailed explanation of the Latvian Gambit.