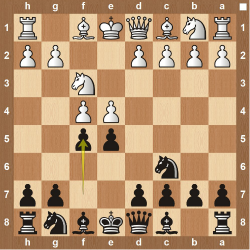 The Adelaide Counter Gambit is a solid attack against the King’s Gambit for black and begins with the moves:

When white plays the King’s Gambit they are usually looking to give up material and then have the initiative for the early part of the game. This defense turns the tables on white and gives black multiple attacking lines and control of the center. White has to be careful because if they don’t play properly there are many traps they can fall into. Below are different options they have after 3…f5.

This is the main line and best option for white. Black should continue with 4…e4. It keeps black with two central pawns and attacks the knight from white.

White can play Ne5 and exchange knights or play Ng5 and attack black’s pawn on e4. Black from here needs to play Nf6 because d5 in this spot leaves black vulnerable to Qh5+.

The move d5 now controls the center of the board for black and opens up the light squared bishop to attack the pawn on f5. Most of the options white play from here continue with black playing Bxf5.

They could decide not to move their knight and play Qe2. This is an odd move and I would continue with d5. Control the center of the board and let them block off their pieces from developing properly. The pawn is pinned down so the knight can’t be captured but that’s ok.

This would be a massive mistake for white. Black can take 4…fxe4 and there is nowhere for white’s knight to move. After 5. Ng1 Nxe5 white is down material and is down a tempo. Black has a massive advantage.

If they don’t take a pawn they might develop to Nc3. Take with 4…fxe4. This ensures you have both central pawns and attacks their knight.

You probably won’t see this often but if you do consider yourself lucky as you have unlocked one of chess’s greatest hidden gems. Playing this wild variations is what so many players love about chess. 4…fxe4 is still the strongest continuation and allows for black to fall into the trap of d5. White might think that both sides will exchange knights but black will have the upper hand once the queen gets involved into the game on h4.

The King’s Gambit is my favorite opening and this is my favorite counter to that opening. Try it out and hopefully you will enjoy it as much as I do.

Below you can watch all of the lines referenced on this page and see a much deeper analysis on the Adelaide Counter Gambit.