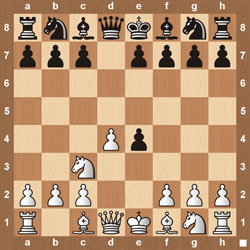 The Blackmar-Diemer Gambit is one of the most ambitious attempts for white to gain a developmental advantage.

From the second move white looks to give away his king’s pawn. Although many top GM’s find this to be unsound, many club level players have great success with it and if you are a very aggressive player I recommend playing it from time to time.

After white gives gambit’s his pawn he then looks to develop his knight to c3, followed by playing f3. This move only shows that those players attempting to play this opening like to play outside standard theory. After black captures on f3, white can either capture with his knight or can instead play the aggressive line (Ryder Gambit) and capture with his queen, thus allowing the black queen to take an additional white pawn on d4.

If white does decide to play the Ryder Gambit, many times black can fall into the Halosar Trap. If you haven’t checked out the video on the Halosar Trap you can watch it HERE.

This opening is very fun for those players that don’t mind giving up a pawn or two in the early part of a game in exchange for a large lead in development and the potential to chase the opponents king around the board all game long. If you however only like to play when you are up in material this is not the opening for you.